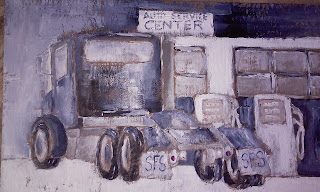 First she writes down the license number on the inside of a match book before approaching the eighteen-wheeler. Big rig, she says, and he invites her to climb up and check out the cabin’s interior. Okay, she says, There are a lot of gauges and dials on the dashboard and he says There are forty-three. It’s dusty; I could write my name on it and he says go ahead as she spells out L-i-l-l-y. He says he has an aunt was named Lillian and she says her real name is Agnes. Being up front with you, she says, and he nods. You new to the lot? And she nods.
Senses are heightened: Diesel-powered Caterpillar engines starting up vibrate the windows, the squish of yard-wide tires rolling over wet pavement, rain patting the huge windshield, headlights accentuating rain beading on the windshield as high beams swoop inside the cab, briefly filling it with illumination as rejuvenated truckers pull out of the lot.
Been doing the Cleveland-Atlanta-Tampa run for twenty-seven years, he says, all Interstate all the way. I’m deadheading it to Tampa. Want to ride along? And she says And then what? And he says We could get a real room and a real bed, and sleep lying down. She feels the matchbook cover in her pocket. Fine, she says, kicking off her flops. Let’s ride, cowboy.
Brief Bio: While Gene McCormick does not haunt truck stops, he occasionally fills up the tank of his Altima at a nearby Shell station.
Posted by Stephen Jarrell Williams at 11:03 AM