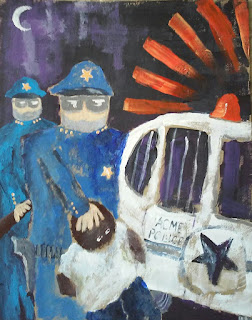 Men Of The Night

Pushing down hard on the top of the moke’s head,
the cop bends him into the cell-like back seat
of the black-and-white,
causing rain to run around his collar and down his back,
co-mingling with the flop sweat
(yeah, the perp had done the crime alright;
they caught him cold on that), and turning
his tee-shirt to a swamp grey.
His arms, cuffed behind his back, are oozing
from scratches and tears all the while he is shoved,
jostled and cursed while sirens blast and
radio code cop-speak fills the squad car,
punctuated with the heavy thump of windshield wipers
sweeping across what has turned out to be hell night
and he wonders what happens next.

Where you taking me?
To the station. We have a stop to make first.

The prisoner looks at his feet, one shoe on, the other
somewhere on the sidewalk, ripped and wet.
He wants to close his eyes and run the ragged edge
of the home-sewn bluejean cuff between his
index finger and thumb over and over, back and forth,
feeling the coarse material  but that is impossible
with his arms behind his back.

Brief Bio: Gene McCormick is no longer a rampaging, felonious “man of the night.” When the sun goes down, it is bedtime. Usually.