This rope has worn my armpits red raw
and they are starting to fester
where the scabs keep sliding, night after night.
My back is crooked from the leaning,
I’m walking about the place half doubled up
without realizing I’m doing it most of the time.
I have shooting pains all up and down my neck
whenever I try and look anywhere but forward
and I am paying good hard found money
for the privilege of causing this slow deformity
upon my once strong and upright body.
But it’s either this or the dreaded ‘Ground’
…Christ Alive, something dies inside me
each time that I say the word ‘Ground’.
There is nothing more cold and wretched
than laying down there, it eats its way into
your bones and it gets harder to get back up
onto your feet each time you are forced there.
It’s the place where Dignity and Purpose
abandons you leaving defeat and Russian
Roulette with ‘Death by Exposure’ in its place.

All ‘Round The Shop

History was the only class
in school
which I behaved myself in
and not because
I had any interest in it, neither.
It was the way the Teacher
approached it
which made it so different.
The first thing he said to us,
as soon as our collective arses
had barely sat down
was that he would not be
giving us books
to write in…for the whole year.
Also that he would not be
writing anything down
upon the blackboard either.
He reckoned
that way we would just copy
and not learn much,
instead he wanted us to just sit
and listen as he told stories.
He was a short, middle-aged guy
in a tweed suit
with those leather oval
patches on the elbows.
With the softest spoken voice
I had ever heard on a man,
there was nothing
but calmness about him.
The class was full of
Punks, Skinheads and Herberts
but we all sat as still as statues,
as well behaved as blind dogs.
As he went ‘all ‘round the shop’
with his magical stories of
Kings & Queens & Treachery
…group spellbound completely
until that end of lesson bell rang
and we became hooligans again. 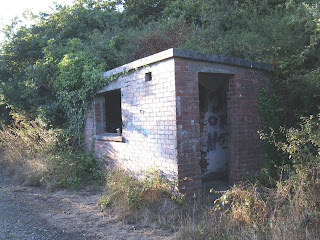 In Britain we have a series of unused railway lines and these are old workmen's sheds scattered along them, the homeless use them sometimes.


Paul Tristram is a Welsh writer who has poems, short stories, sketches and photography
published in many publications around the world, he yearns to tattoo porcelain bridesmaids
instead of digging empty graves for innocence at midnight; this too may pass, yet.

You can also read his poems and stories here! http://paultristram.blogspot.co.uk/