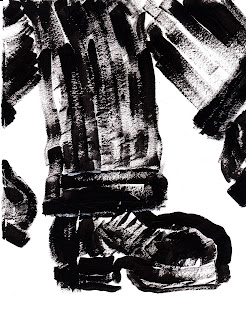 Point A To Point B

He always, year ’round, wears heavy dull black shoes
with thick black soles and heels
and when he walks his slouch-shouldered amble,
he deliberately puts the back edge of his heel
down first, and after what seems like
a second or two but could not be
anywhere near that long, down comes his sole
flat to the ground in an almost slapping manner.
His cuffed wool trousers droop halfway down
his shoelace eyelets, covering the bow,
the trouser seam breaking well above the ankle,
quivering with every step.
And that’s how he walks going from
point A to point B. 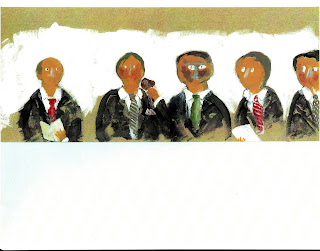 The Village Board Says NO

There is not a hint of commerce,
especially not a spaces-for-rent,
begging-to-be-abandoned strip mall,
in the village but it does boast
a flat-roofed, no overhang,
Saltine box-shape of a clapboard building
surrounded by dust and gravel,
the straight lines of the town hall broken
only by cubes of window air conditioners.
It could pass for a small town VFW club,
jerry-rigged rooms of plywood walls
and floors making navigating to the
meeting rooms as perplexing as the
catacombs of a neglected English formal garden.

The man from the village will spend
the next two hours here and is reminded
by a mind-flashing non-sequitur
that for a few minutes in Haiti even the dead
are considered important. This is not Haiti.
The board officials will have their
chest thumping moment while disregarding
frivolous diatribes from civilians;
the board is not comprised of Gandhi’s,
just a quorum of blotchy-faced pensioned
corporate suits feeding at the bully pulpit
but then it is not for the man from the village
to re-route ignorance or update
age-yellowed ordinances. He is in attendance
only to covet his neighbor’s wife. 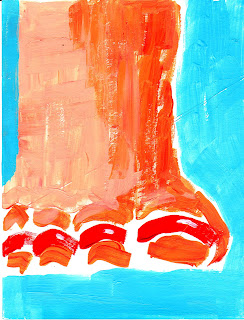 On unravel days when nothing makes sense
or can be trusted including the time of day,
he strips off his clothes, folds them
with the precision of a hospital attendant,
and lays flat out on the cool hardwood floor,
head sideways and ear pressed to the wood
to hear the crashing of the Pacific surf
and he does this with his eyes closed.
Should a sound other than water lapping
the beach be heard he opens his eyes
and if the day is taking a turn for the better
he will see the prow of her foot,
a set of vermillion-painted toenails
and if the day remains gray and dank
he will see the half inch thick
rubber edge of a black sole,
either resolution inches from his face.

Posted by Stephen Jarrell Williams at 10:26 AM