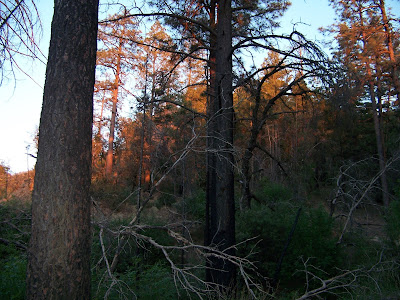 Rare Bird Alert
The evening drive along twisting curves
all the way up to the saddle
and down past fire blackened trunks
that absorb the waning light
leads to the spot the bird was last seen.
First one this far north. A tease
to anyone watching. Maybe sitting
on a nest in the bank
behind layers of green. An hour,
nearly two and still
no sign. Only the sound
wild turkeys make when they wrestle
the air to reach a high roost,
and away in the darkening pines
a hermit thrush singing the day to its end.
Two Ravens
The raven on a telegraph pole
turns his head with the wind
that tickles a ruff
from his sky polished neck.
*
A hawk slips between the pecan trees
at the grove's edge
where a raven in pursuit
has it splayed against the light.
David Chorlton is a transplanted European, who has lived in Phoenix since 1978. His poems have appeared in many publications on- and off-line, and reflect his affection for the natural world, as well as occasional bewilderment at aspects of human behavior. His most recent book, A Field Guide to Fire, was his contribution to the Fires of Change exhibition shown in Flagstaff and Tucson in Arizona.
Posted by Stephen Jarrell Williams at 12:41 AM