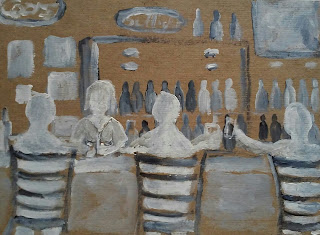 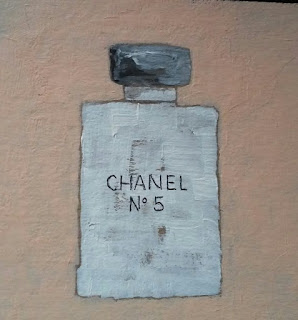 A woman who is badly perfumed
is not a woman.”—Coco Chanel
1.
To the right of the lobby, or foyer, is the restaurant’s bar,
a comfortable room with a dark wood bar seating twelve
with surrounding tables seating another thirty or so.
Straight ahead from the lobby is the restaurant proper,
booths and white-clothed tables
seating many more than the lounge area.
It’s late, the shank of a dispirited evening
for the restaurant’s ledgers, and Tommy the maître ’d
is not at his lobby post awaiting the two who just arrived,
their first dinner together. They stand for several minutes:
--Shall we eat at the bar or wait to be seated
in the restaurant?
--We can seat ourselves at the bar and not wait
for the maître ‘d.
The only conclusion was to wait to be seated at a booth,
across from one another, looking at each other’s face
saying and hearing what wants to be said and heard.

He appreciates what she is wearing: a black mid-thigh
raincoat wide open at the top over a white sweater
with inch wide horizontal stripes under a
light beige vest and a necklace of many interlaced
flat silver pieces that looks Indian but isn’t.
There is no other jewelry. No wedding ring.
Her slacks are grey, almost as black as her hair,
which is shoulder length and parted in the middle.
She is wearing Allure by Chanel perfume
and puts on glasses only to read the menu.
A businesswoman’s smart phone is tucked in her purse.

The black mid-thigh raincoat may not be true rain gear.
The material feels like plastic-vinyl-polyester
to the touch, the type of synthetic material
that would cost more per yard than mundane silk,
less than cashmere, more than cotton.
It repels water but still is not an absolute raincoat.
It has a belt.
Fashionable body armor covers her body,
exposing only her face, her hands.

She is lean, almost lanky.

2.
Two hamburgers each on its own plate.
One well done, unadorned, with a garden salad.
The other is medium rare with cheese
and French fries to the edge of the plate.
Hamburger A is hers, hamburger B is his.
She is drinking a dark Guinness
(--I used to live in London, you know.
--No. When was that?
--My senior year of college and just after.)
He is drinking a whiskey on the rocks.
Both burgers are served open-faced
on a large bun, fresh and spongy to the touch.
They are at a steak house of repute;
they are the only ones eating hamburgers.

The hamburger is large but she puts the bun lid on top,
picks it up with both hands and takes bites.
He cuts a triangle of his burger, still flat on the plate,
and eats it with his fork.
Neither of them comment on the burgers.
Neither asked the steak house server for mustard
or ketchup, no lettuce, no tomato and god no, no sauce.

There is no inspiration to remember the colors
of the server’s uniform (black and white),
nor of the maître ‘d (black). Piped-in music
is forgettable, unlike the Allure
and lack of rings on her fingers.

A clink of drinking glasses before the meal.
Talk during the meal is not memorable.

The Guinness is now warm, nearly empty.
The rocks in the whiskey glass liquefied
to wetness at the bottom of the glass.

3.
But the evening lacks sparkle.
The conversation is not stilted but is flat.
After just over an hour he helps her on with her coat,
holds the doors and they walk to their cars
in the parking lot, having driven separately.
Living in the same community, they each patronize
the Shell station to the west side of the restaurant,
and the community bank to the east. The parking lot
is in the front of the restaurant with a smaller
such area in the rear. The lots are usually full
or nearly so, and totally so Fridays and Saturdays.
It is a mature customer base; BMWs and Lexus’s
outnumber Chevys and Fords ten-to-one.
She drives a sports vehicle and lives nearby, two miles.

The night sky is all black, no blue, few stars;
a Monday evening that is neither cold nor warm
but it is raining slightly.

She hugs him goodnight and he says
I don’t want to let go.
You have to, she says, and so he lets go.

Brief Bio: Gene McCormick lives on the rocky north shore of Fiji on a 150,000 acre ranch raising cheeseburgers and hell, in reverse order.

Posted by Stephen Jarrell Williams at 11:31 AM