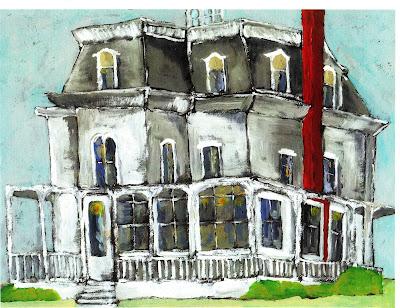 It has a bit of give to it, the second step leading to the front porch, but wood in the ocean-air climate often—sooner than later—will acquire a bend and render a creak while still allowing access (be careful not to trip over the coil of heavy rope laying about the porch for whatever reason but which offers a nice color complement: tawny rope against the green-painted flooring) to the wrap-around front porch veranda gritty with wind-blown beach sand all about including the swing hung by two chains from heavy-duty hooks screwed into the porch ceiling on which you could sit and watch heavy nor’easter weather rolling in and not get wet though it was usually prudent to move around the veranda to face southwest, the swing creaking as beams grunted an oomph of several generations chronology, and at night when the swing was in use and only the  diffused yellow light of the globe from the porch light illumed, the rope coil was barely visible and the sand, seen or not, was tolerable but everything came into a sharper focus when the front door opened and light from the foyer spread across the welcome mat and extended to the top of the steps, so quietly that there was no creak.

Gene McCormick is a writer who paints without preference for either discipline.  His art is in private and commercial collections and he has illustrated a number of books.  He is the illustrator for Misfitmagazine.net.